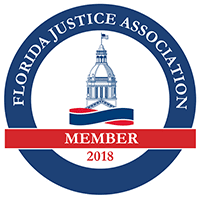 Attorney Derek A. Reams is a Board Certified Civil Trial Attorney specializing in motor vehicle crashes – car crashes, motorcycle crashes, pedestrian and bicycle crashes and semi tractor-trailer crashes He also handles premises liability cases and medical malpractice cases. Mr. Reams is the head of the firm’s litigation department and he has been with Q Auto & Injury Attorneys since January 2005. A native Floridian born in Tallahassee, Florida, Mr. Reams played collegiate baseball at both Florida State University and the University of Southern Mississippi where he received his undergraduate degree in Criminal Justice in 1997.

After graduating from Southern Mississippi and before attending law school, Mr. Reams worked for the Florida Department of Law Enforcement and completed the Minimum Standards Training Course to become a law enforcement officer with the Leon County Sheriff’s Office. In 1999 Mr. Reams began law school at the University of Mississippi (Ole Miss) and graduated with honors in December 2001.

Upon graduating from Ole Miss, Mr. Reams worked as an Assistant State Attorney for the Sixth Judicial Circuit in Pinellas County Florida from January 2002 until January 2005. Mr. Reams has more than 70 jury trials and, after passing a rigorous written examination and obtaining recommendations from other attorneys and judges, he obtained Florida’s Civil Trial Attorney Board Certification in 2013. Less than 7% of all of Florida’s licensed attorneys are Board Certified in their area of specialty. Mr. Reams is also admitted to practice in the United States Federal Court Middle District of Florida and has successfully argued appeals before Florida’s Second District Court of Appeals.

From all of us, have a happy Independence Day! www.QLaw.com#letfreedomring #happy4th #happyindepenceday ... See MoreSee Less